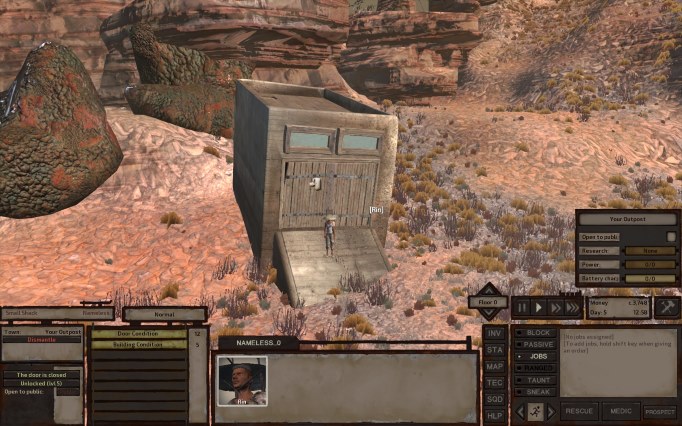 By Alex EverettAugust 24, 2017No Comments

My first experience in the world of Kenshi ended with me being eaten alive.

I started this short, brutal and entirely unpleasant existence in a small town called, fittingly, ‘Waypoint.’ I was completely unarmored, wielding only a large brass ‘club’ (it was a pipe) and in possession of 1,000 ‘cats’ (it’s gold). My adventure started next to a bar, as all great adventures do, and upon entering I was greeted by a plethora of patrons. Talking to any of them would allow me to purchase their services as a mercenary for one day, for the low, low price of 5,000 cats. I decided to go it alone.

So off I went, into the badlands of Kenshi… which is what I assume the world is called, but I don’t actually recall getting clarification on that. Controls in Kenshi are fairly standard for an isometric game; click the mouse where you want your character to go, right click to interact with an object; the space bar will pause the game, allowing you to plan out moves or access different screens, of which there are plenty, including a build screen, which I’ll get into later. When I started, I hadn’t been given any sort of starting quest or a giant way-point saying ‘GO HERE NOW,’ so I was pretty much left to my own devices. I was free to achieve whatever goals I wanted in whatever manner I wished. I had briefly considered the life of a merchant, creating an economic powerhouse from the humblest of beginnings, but quickly put that by the wayside in order to achieve more pressing short-term goals; getting some pants and some food.

I wandered further from the gates of Waypoint, slowly making my way towards the next largest city. Along the route, I discovered that I could mine copper and iron ore, which the game informed me would fetch me roughly 100 cats, depending on the economy; the economy, however, was in a constant state of flux within the game, and as such I might be able to fetch more or less, depending on where I went to offload these goods. I also discovered that copper and iron ore are heavy, and the added weight was making my character run slower, while having the fringe benefit of increasing my athletics skill, presumably because running with 500 pounds of copper around your neck can be tiring. This adventure taught me three things: Kenshi has locale based economy, where certain goods are worth more in certain areas, depending on saturation; concepts such as weight and encumbrance matter in this game; and that my skills went up or down, depending on my usage, similar to the system used in games like Skyrim. Content with this new knowledge, I continued my run. 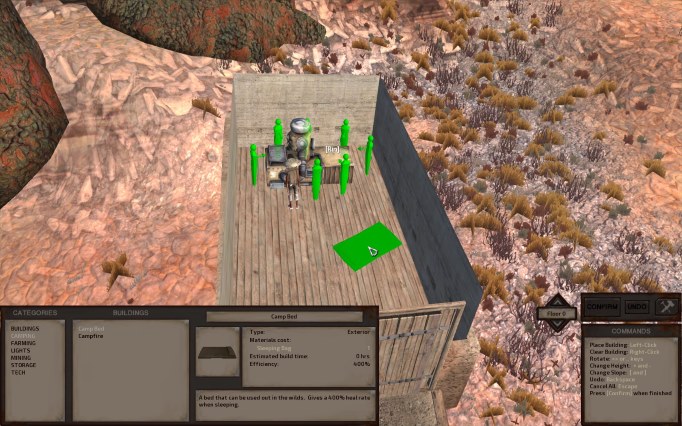 And by God, run I did, because the distance between population centers in Kenshi is massive, and barren. Aside from the occasional roaming party of wild animals, and the infrequent wandering merchants, most of what I saw was ore deposits, mountains, and trees. Luckily, all I had to do in order to set my destination was open my map and left click where I wanted to go; my character could do the rest himself.

This gave me time to take a look at the build feature of the game. In theory, I could claim my own parcel of land, build a shack and a workbench, and start my own settlement. I would attract followers, or customers if I were so inclined, and eventually become another town on the map, provided I wasn’t wiped out by bandits or roaming cannibals. I was definitely looking forward to starting Alextopia.

Alas, fate was not with me this day. My momentary lapse of attention had caused me to charge head-on into a pack of wolves. Sans musical or audio cues, I wasn’t really aware that I was being attacked until I noticed a small written notice in the bottom left of the screen: YOU ARE NOW BLEEDING. I tried to fight back; I paused the game and right-clicked on the wolf closest to me. But, since I had been avoiding fights the entire time I had been playing, my character was martially inept, and the wolves won.

And then they ate me. It was just as gruesome as it sounds.

Initially, this was going to be a straight-up review of Kenshi, but as I played it, I realized that wouldn’t necessarily be fair, not only because it isn’t done. Kenshi is a very difficult game to write a review for; it is simultaneously filled with content, and a barren wasteland. It definitely has the beginnings of a great game, but the obscurity of some of its systems will definitely cause frustration for some players.

Some people will hear ‘open world’ and think Skyrim or Fallout 3, but it’s so much more open than that; the Bethesda games are more an amusement park, where you can explore, but only within certain parameters, while Kenshi is like being in a kid’s sandbox, with endless opportunity to build your own stories.  It’s definitely not going to be for everyone, even though most of it has been done in games that have been universally praised, from the Real-Time-with-Pause mechanics of Pillars of Eternity and the Baldur’s Gate franchise, to the usage-based skill system of the Bethesda amusement-park style games.

True, it is still pretty rough: sound assets don’t exist or are too tame; the tutorials could use some tweaking; and, for the love of all that is good and holy, there needs to be more to do. Yet, I don’t regret the 5 hours I spent in my characters world, and I am now continuously thinking of a new character to run. To me, that’s the sign of a good game.

Not recommended if you: