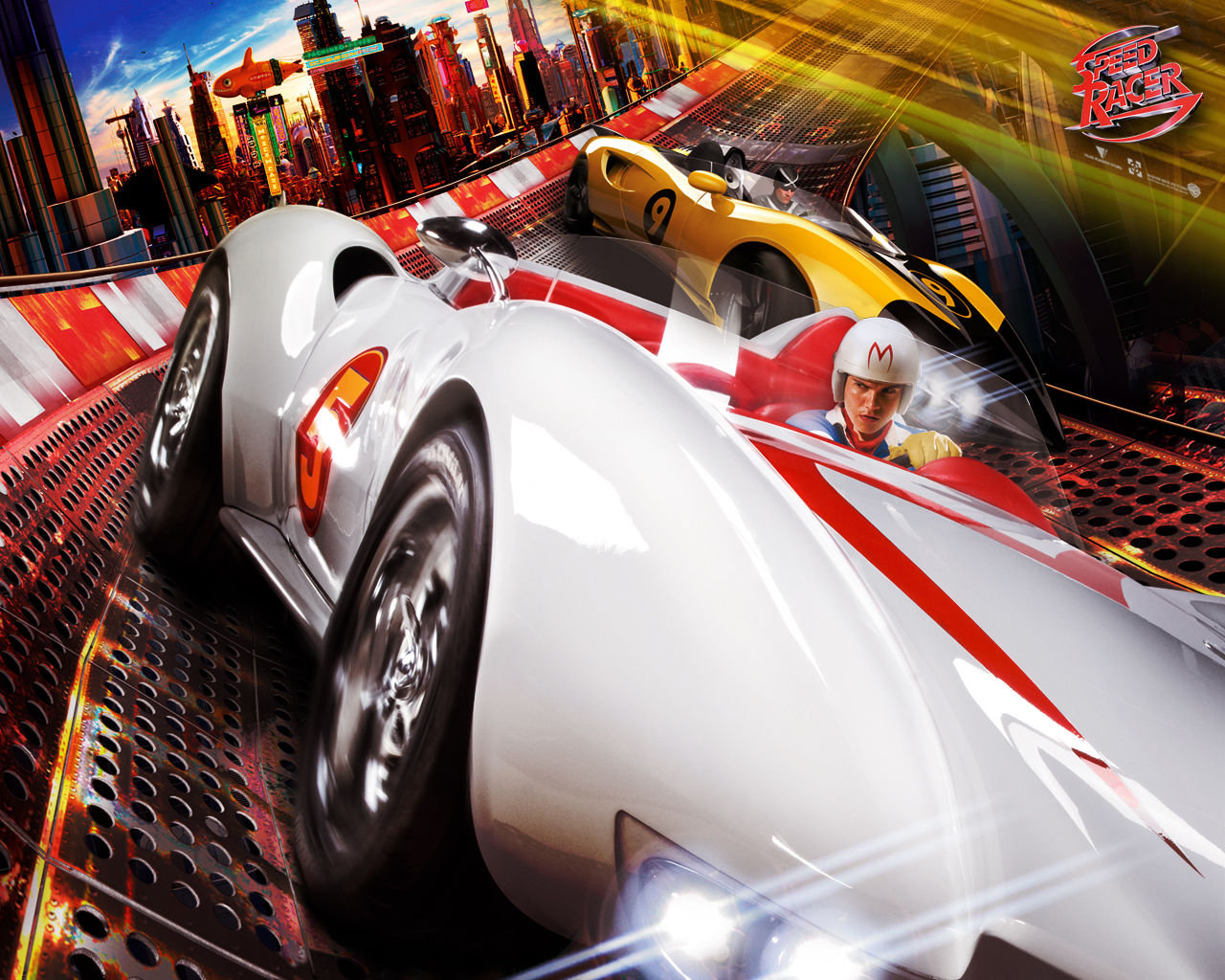 My favorite arcade games are the car-shaped racing booths. I love crawling into the too-tight space and using my body to “help” propel the car around corners, so it’s no surprise that my first game review would be of the racing variety. I took two different race-based video games, Mario Kart Wii (published by Nintendo) and Speed Racer: The Videogame (published by Warner Bros. Interactive) to the track.

My six-year-old son and I started with Mario Kart Wii on our brand new Wii. He was already familiar with the game featuring characters from the classic Super Mario Brothers series. Mario Kart Wii has a Saturday morning cartoon feel with silly sound effects and Play-Doh-bright graphics that are almost painful to look at, the way too-sweet candy makes your teeth ache.

There are 32 courses to choose from, including 16 unique tracks that cover a variety of terrain from beachfront sand dunes to shopping mall corridors. But the most popular feature in the world of Mario are the characters that populate it. My son picked Yoshi, Mario’s companion since his debut in Super Mario World in 1990. The squeaky-voiced dinosaur with a high-pitched laugh appeals to Owen’s needs in a character, mainly that they make him giggle. I chose the Princess, a familiar face from the Super Mario Bros. arcade games in the 1980s, because I never did manage to rescue her.

The characters offer a variety of racing experiences, from the speedy Yoshi to the more easily-maneuvered Bowser, Mario’s Koopa-nemesis, but the tracks are full of unanticipated drop offs, literally. Owen and I spent most of our races driving off the edge. And since you can’t unlock the special courses unless you finish first among an entire field of racers, it felt a bit like I was being denied something I’d already bought. But that’s the point of many video games, unless you master the techniques by playing for hours, you can’t really play the whole thing.

One equalizing factor came in the form of the special bonuses you can pick up along the way: turtle shells that spin another racer around if you drop them in their path, mushrooms that give you boost and a speeding bullet of invincibility. I figured out what a prize that was when Owen started yelping as he caught up with us cocooned in the safety of a giant bullet. The last may become first, for a few moments anyway, adding an element of surprise to the race.

For my next gaming experience, I wanted something that would better appeal to my racing roots. Enter Speed Racer: The Videogame for Wii. With futuristic tracks (think upside down, just like my favorite roller coaster, the Super Dooper Looper at Hershey Park) and advanced moves, the game offers a variety of skill-building options, yet is still fun for the beginner.

Based on the 2008 Wachowski Brothers’ (think the reclusive directors behind The Matrix) movie of the same name, the game reflects a similar storyline. Speed, his girlfriend Trixie and his mysterious benefactor Racer X vie for various titles against a variety of competitors, some of them backed by the nefarious owner of Royalton Industries, who is angry that Speed has rejected his offer to race under his brand.

The graphics in this game are excellent, with realistic scenery and easy-to-distinguish turns and obstacles. The cars have exciting designs and unique capabilities, including “car-fu” moves that must be mastered to experience the joy of flipping, spinning and pummeling into, and past, the competition. The most important thing for me is that I felt like a real racer… even though I was traveling at speeds nearing 400 mph while doing a loop-dee-loop and using car-fu to knock rivals into a fiery volcano.

The driving experience was truly top notch, but it wasn’t  just about the racing. I enjoyed knocking competitors off the track with some signature car-fu moves, once I figured out how to execute them. The sheer variety of smashes, jumps and flips possible is impressive and quite satisfying when overcoming your rival at the last moment to win the race.

It’s interesting that both games offer aggressive options; ones I can choose to include in my strategy, or ignore while I enjoy a more straight-forward racing game.

After a few laps with both racers, Speed Racer: The Videogame wins the checkered flag  and will become a permanent part of my gaming rotation. Although in the category of a child-friendly game to share with my son, Mario Kart Wii provides the more satisfying experience.