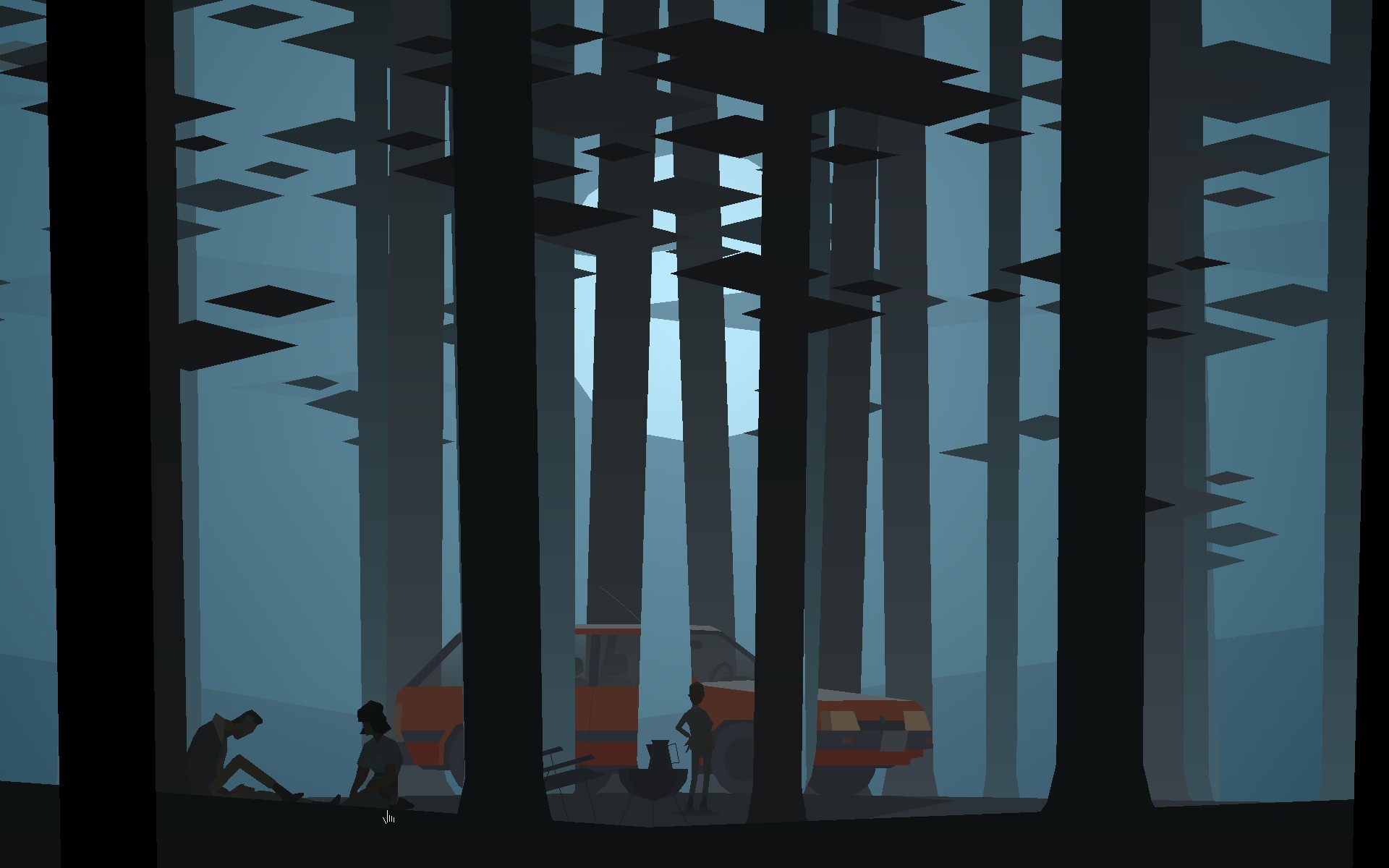 Mystery and the Mundane: Kentucky Route Zero Act I & II

Despite the humble circumstances of its original development, Kentucky Route Zero is no stranger to critical acclaim. Two-man team Jake Elliott and Tamas Kemenczy originally began development on the game with a meager $6500 fundraising goal on Kickstarter – an impossibly small budget when you consider the hundreds of millions of dollars that can go into AAA titles from major developers, but that has not stopped their game from garnering high praise from video game critics both big and small(er).

The game itself, a self-described “magical realist adventure game about a secret highway in the caves beneath Kentucky, and the mysterious folks that travel it” is a throwback to point-and-click adventure games of yore, with a particular emphasis on storytelling. Cardboard Computer’s unique approach brings a particular emphasis to art direction and writing as opposed to mind-boggling puzzles or massive action scenes. And it would seem that approach has paid off. Act I of the game was released in January to great acclaim. Several months later the Independent Games Festival awarded Kentucky Route Zero with its “Excellence in Visual Art” award. And now, after several delays, Act II has been released.

So – after moving from no-name Kickstarter project to indie game breakout hit, can Cardboard Computer meet the hype that follows the renowned first act?

The first act of Kentucky Route Zero charmed gamers with its highly stylized and vaguely retro aesthetic, fantastic writing, and the curious vagueness of its plot. The good news is that those elements return, and in some cases they are stronger than ever.

The graphical style, for example, has gotten even stronger with Act II than it was in the acclaimed Act I. The environments of the game seem more dynamic, involve more moving subtle animations in the foreground and background than the previous act. In addition, the game’s textures seem to have been smoothed in some ways – an aesthetic choice I am not entirely sure I agree with, but which ultimately makes the game look and feel more polished. Act I unapologetically refused any kind of anti-aliasing on fonts, giving it a particular retro feel that is lacking in Act II. On the whole, however, the scenes drawn in Act II feel more imaginative, and more creative than the majority of those found in the first act.

The writing and narrative of Act II sees a similar re-imagining. While Act I followed exclusively the game’s protagonist, Conway (a delivery driver), as he attempts to make a delivery to an address that doesn’t exist. Throughout Act I, players guided Conway through their clicks to interact with elements of the world and other characters. The bulk of the story was told through conversation with other characters in the game, and the quirky, enigmatic responses of Act I’s characters let the game some of its strongest attributes. As with Act I, the dialogue options are fantastic – allowing players the ability to dig deeper into most conversations if they prefer. Most important of all, the dialogue and the narrative feel well-crafted. Writing certainly didn’t take the back seat in the development process here, and as a player who enjoys story-driven games, I appreciated that. Although I’m not sure that the application of the genre “magical realist” is really earned here, the odd world of the game certainly comes to life through the interplay between the art direction and writing of the game.

It is the story, of course, that kept most players interested through the first act of the game, and Act II progresses that story in ways both logical and surprising. Picking up shortly after the close of Act I, Act II thrusts Conway and Shannon deeper down the rabbit hole, lost  on the mythical underground highway for which the game is named. Some of the hallmark ironies of the first game are back as well, including giving the player somewhat faulty directions, and even putting the player in charge of navigating a bureaucratic office building to get papers signed. Those sorts of moments, the ones where the mysterious and the mundane coalesce, give this game’s storyline the hallmark traits that it was known for in the first act.

But Act II also brings with it some changes to the way that the game plays and tells that story. From a design perspective, the game’s environments utilize a “2.5D” space more frequently – meaning that the usually flat levels of Act I, which utilized a static camera, have given way to levels where oftentimes the camera will “move,” revealing a new part of the level. This was used lightly in Act I, but has been made more robust and is used much more widely in Act II.

The storytelling methods of the game have changed, as well. Although throughout the majority of the game you still control our protagonist, Conway, Act II introduces a short part of the game in which the player controls another character. But one of the more interesting changes is some alteration in how the game is told. In Act I nearly every encounter was progressed, as I mentioned before, through dialogue – when a player clicked another player they would provide some piece of information that progressed the storyline, etc. Act II’ s fourth scene, on the other hand, introduces a really interesting storytelling mechanic. All of the dialogue in the scene actually servers as a narration of what Conway and Shannon explore. The dialogue that drives the scene is not of either Conway or Shannon, but rather of the occupants of the strange town that the two discover along their way, with mining officials interviewing the residents on exactly what they saw the duo doing. When the player makes a certain move in the game, it is narrated and twisted in kind by a given person’s interview.

To some gamers, this kind of change in the game’s storytelling  might be merely superficial, or even downright confusing, but what it indicates to me is that Cardboard Computer is not simply resting on their laurels with this game. They have seen great success with Act I, and they could have simply continued to do the things that made that game work well, but instead they are forging ahead into new, untested areas. I think that attempts to variegate the storytelling experience indicate that more than anything else, so changes in the way that the game is written and how the events transpiring on the screen are delivered to the player through text are welcome changes in Act II.

My experience was not all pleasant, though. Although the design and writing have moved in a new and interesting direction, a few of the scenes in Act II contained a surprisingly small number of interactive elements that the player could click in the world. This was something that Act I did quite well – balancing the need for clickable elements in the world with the complex choices that can be made in dialogue – but Act II unfortunately oftentimes ignores. Scene III, for example, barely even allows the player to explore the environment. While the writing and storytelling that occurs in that scene makes up for the lack of player interactivity, it edged on too few.

All in all, however, Kentucky Route Zero Act II succeeds in not only meeting the expectations set by its predecessor, but exceeding those expectations by massively expanding the aesthetic style of the game, its capacities for storytelling (and as a result, its evocative and touching storyline) all while pressing forward a compelling narrative that has me hooked.

Kentucky Route Zero is available both through Steam and the Humble Store. $25 gets you access to Act I and II and all future acts (III, IV, & V), and is available on Windows, OSX, and Linux.