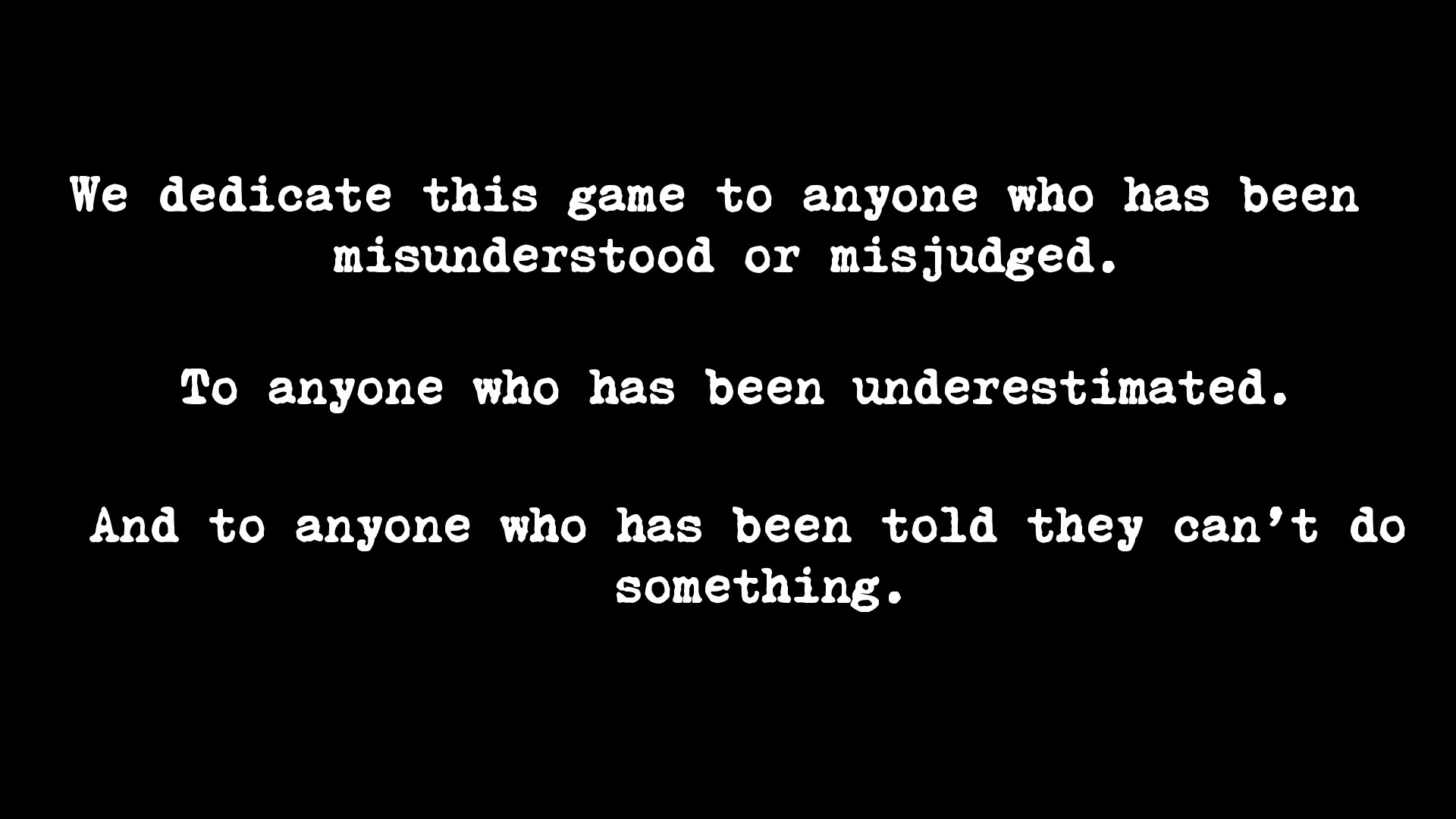 Perception follows Cass, a young blind woman who is plagued by recurring dreams of an abandoned mansion, a rope, a ticket, an apple and an ax. Deciding to put her nightmares to rest she goes to investigate the old house alone. Players are able to see using vibrations in the environment. Concentrated noises from leaky pipes or un-tuned radios emit enough noise to illuminate small areas while “tapping” sends out a wave strong enough to see entire rooms for short periods of time. While tapping is the easiest way to navigate, it also produces noise which attracts enemies. Players must find an uncomfortable balance between sight and discovery.

Each chapter explores the life of a different owner of the mansion. The house warps itself to fit the environment and delusions of the previous occupants.

Those familiar with Ben “Yahtzee” Croshaw of Zero Punctuation fame might be familiar with the his term “the shinfuls” which will be explained here for our good readers as “shoddy final level syndrome.” While the first chapter of Perception is a triumph of suspense and each chapter has fantastic moments, the later chapters loose some of that magic and become less memorable. What makes the first level so great is its mystery. It’s not just that the mechanics are new. Of course wandering around in near perfect blackness, serenaded by the creaks and growls of a decaying house puts players perfectly on edge. While this experience may loose its claws after the first half hour of gameplay, it’s the job of the story to keep the fear quotient at a max. 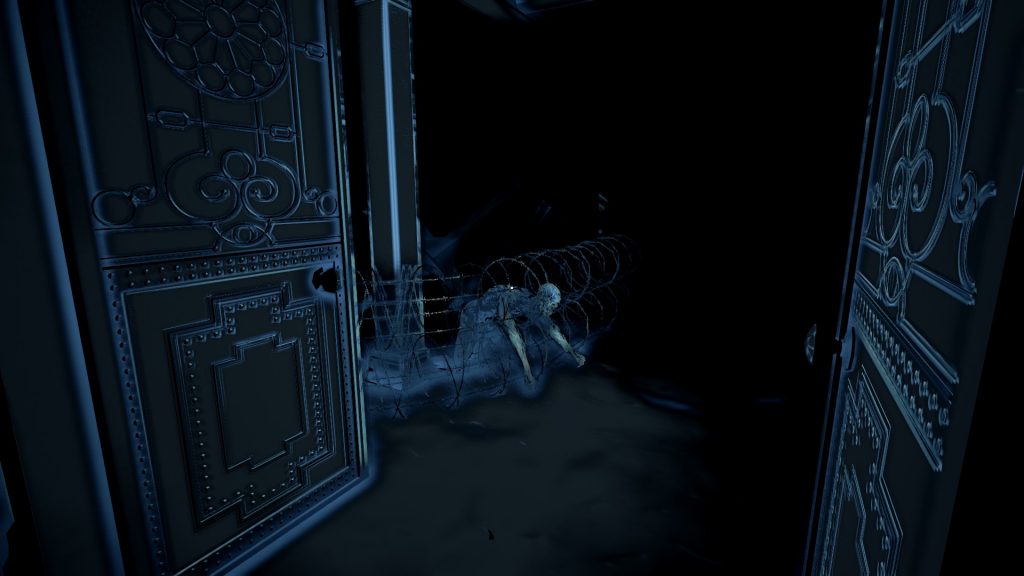 There are a couple things that I think directly defused the tension. First and foremost, the anthology nature of the narrative did little to foster suspense. The first chapter is so great because it’s so strange and full of mystery. It takes place in the near past when a husband and wife anticipate the arrival of their first child. The mother seems to be loosing her grip on reality and it isn’t really clear whether it’s all in her head, a result of her husband’s forced medication regimen or the effects of a curse. I was really intrigued and looking forward to seeing the resolution, but just as the family reaches a crisis, it’s over, chapter’s done and the next narrative begins.

The second issue I took with the game was less about story and more mechanical. Pretty early on the player starts encountering hiding places. Of course, the first question raised when given the option to hide is: what am I hiding from? When “The Presence” first appears it’s genuinely freaky. However, as soon as you hide, it feels like the threat is just gone. It doesn’t seem to bother chasing the player so as soon as you’re in a safe little box or closet the concern is over. Outlast has a similar policy regarding dealing with monsters. The scary part was sitting in your closet listening to that terrifying, unknown monster prowling just outside and oh no it sounds like it’s getting closer, is it gonna find me? OH LORD I THINK IT HAS! I’M GONNA DIE, OH NO OH NO OH NO! But in Perception, those tense moments of internal panic don’t exist. 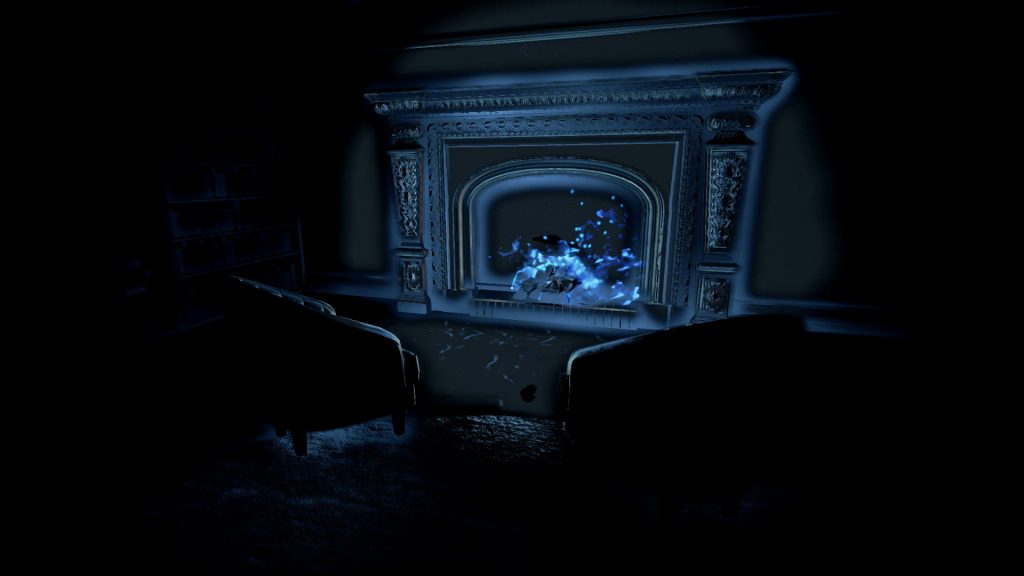 This is a little more nit picky but here’s the thing: why is the house so enormous? It seems completely unreasonable that the four families portrayed in the game who numbered from 2 to 3, claiming no mass fortune or social standing should inhabit such a ridiculously sprawling estate. I understand, it’s a video game, some elements will be outrageous, but there are consequences to gameplay. A major element of the story is that the house warps and changes to match the delusions of its residents. It’s hard to get a sense of its changing nature when the estate is so big players might as well be starting in one corner and making their way to the other side without ever revisiting the same rooms. If the house was a more reasonable size, players would get a sense for the layout of the building and appreciate the changing use of space across the 4 time periods. As it stands, it feels as though the game takes place is 4 separate locations that might as well not even be the same building.

Perception is somewhat unique in that it boasts a particularly vocal protagonist. She’s quick to offer her insights which builds her character into a relatable friend. Her commentary was helpful in interpreting the more ambiguous parts of the game. Interestingly, the play has the option to tern her audio off. I really can’t see any reason for doing this unless someone is perhaps playing through for a third or forth time. Even so, the replay value of the game is so low, I don’t foresee anyone running into this problem (except maybe play-testers).

Overall Perception is an interesting concept that is well executed in some places, but lacks a sturdy narrative to prop itself up. If it just so happens that you have a copy of this game sitting around in your Steam inventory I would suggest giving it a a try, but for the price I have a hard time recommending it. The game only takes 2 hours to play and without any real replay-ability the price is quite steep. I feel terrible giving this game a so-so review because I’m sure the developers put a lot of time and effort into it. Visually it’s well polished but overall it doesn’t quite come together into a satisfying experience. 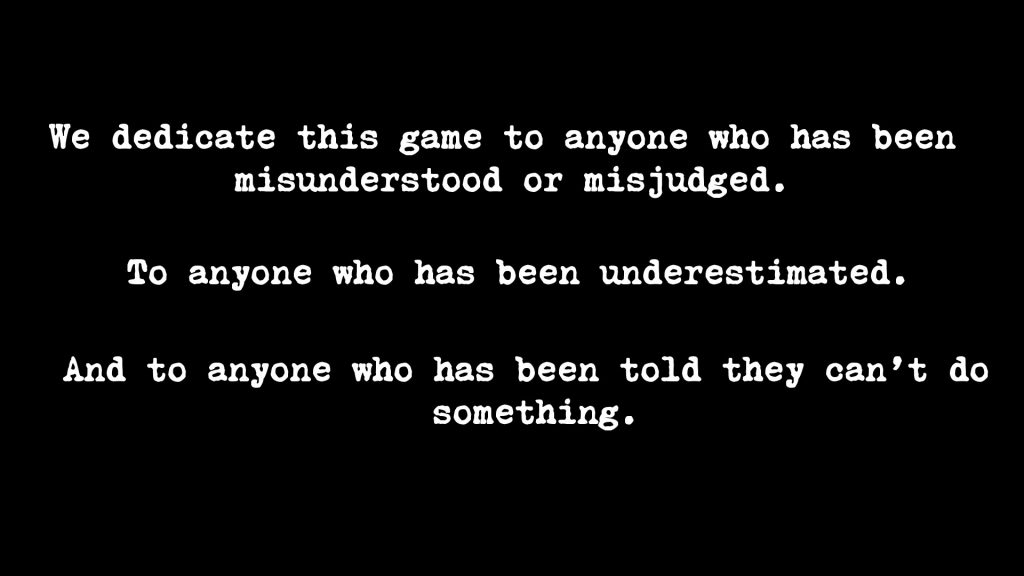