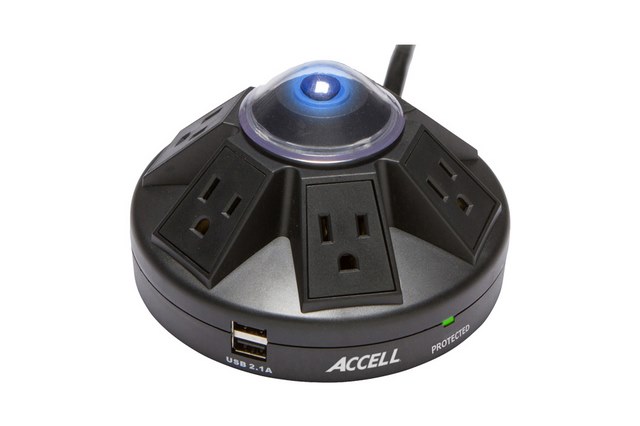 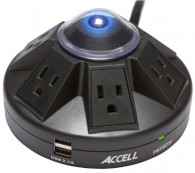 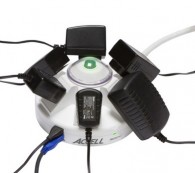 For some reason this makes me think of the miracle of life. I suppose it is the miracle OF THE POWRAMID!

Most surge protectors are fairly bland: white or beige strip, unable to plug in multiple wall warts next to each other (I am looking at you computer speaker manufacturers), often some kind of switch to to run off the power and that’s about it. More than likely you have 2 (or if you listen to this show regularly, 3 or 4) hanging out and collecting dust on the floor. Accell aims to change that with the latest salvo in the war on dull power strips with a little help from the Egyptians – (and I think the aliens) – with the Powramid.

Shaped like a black UFO with a glowing on/off switch, every single plug is accessible and doesnt block the other, and it is raised just high enough that you won’t have any cords unnaturally bent once they are plugged in.  Just the circular shape alone is enough to warrant notice, but the real bonus here is the two USB charging ports also built into the unit. This makes the Powramid a great companion to anyone who needs quick power without taking up a wall plug. Throw in 5-year $100,000 connected equipment warranty and a 6ft long cable and you have a winner.

Honestly, I think this surge protector looks and IS pretty much the bees knees. Listen in to hear Ivan Baird and myself climb to the top of the power center and USB charging station Powramid.