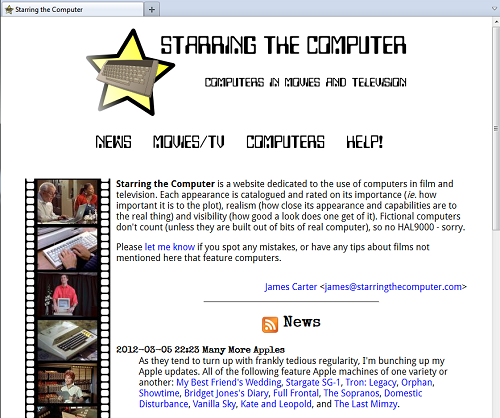 Sure, there are your Internet Movie Databases, TV databases, and celebrity-nude-scenes-in-feature-film databases… but where is the database dedicated to the cinematic digital stud, the computer?

Luckily we can now thank James Carter for that.

He has created a website that is dedicated entirely to the computer as it appears in film and television shows, Starringthecomputer.com.

From the mighty Intertec Superbrain as featured in Knight Rider to the Apple Newton MessagePad 100 from Hackers, its all in there. Also included is a graded system of how relevant the computer is in the scene along with the amount of realism that the TV/film writer attributed to the system.

It’s a fun site to search through and you can even learn a bit about the systems themselves with links to more detailed information.

I’m just glad that I now know it was the Apple iMac G4 that the girlfriend uses in that pivotal scene in 2003’s Hulk, and not the iMac G3.