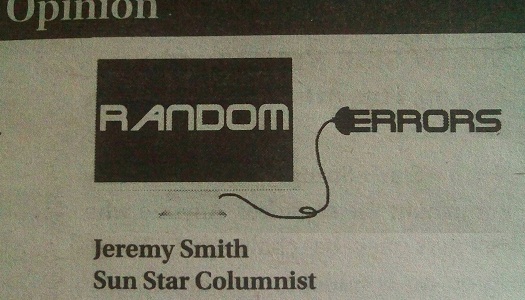 You Own That, Right?

So I write a column for the UAF Sun Star that runs weekly. It deals with technology, and I get paid. Not too shabby, putting that Journalism degree of mine to some work. Anyway, THIS is that column.

I just bought the latest iteration of Microsoft’s money-cow for the Xbox 360, Halo: Reach. The sixth in the series, Halo: Reach sends you and your fellow Spartan soldiers against an invasion of alien Covenant. I usually play a game until I’ve wrung out all the fun and then trade it for a new title, which is how I got this one. A recent court ruling, however, may make the trading and selling of software a thing of the past, and all because of a bit of text we rarely read.

The U.S. Court of Appeals for the Ninth Circuit upheld that software companies can deny consumers the right to resell their products. It began with Timothy Verner, a man who made his living selling products on eBay. He purchased some used computers and software from an architect firm and placed the items up for auction. Autodesk, a publisher of 3-D design software, saw that the auction included their flagship product AutoCAD.

They contacted eBay and attempted to have the auction removed, referencing their End User License Agreement (EULA)… that’s the thing we just click Agree on during software installation. The AutoCAD EULA confirmed that selling the program is illegal because it was never sold in the first place. Once eBay threatened to ban his account for the violation, Verner sued Autodesk for the right to sell the software.

In Vernor v. Autodesk, Autodesk argued that by installing the software, the architect firm agreed to the EULA. It stated that the software was licensed, not owned, and that the license itself was non-transferrable. Vernor countered by saying he never agreed to any license and should be free to sell the software. The presiding judge said: “A software user is a licensee rather than an owner of a copy where the copyright owner (1) specifies that the user is granted a license; (2) significantly restricts the user’s ability to transfer the software; and (3) imposes notable use restrictions.”

Confused yet? The thing is, we skim by legal language all the time when it comes to our digital media. According to the standard EULA language from game publisher Electronic Arts, “This Software is licensed to you, not sold.” Amazon attaches this rider to MP3 downloads, “”You agree that you will not redistribute, transmit, assign, sell, broadcast, rent, share, lend, modify, adapt, edit, license or otherwise transfer or use the Digital Content.” This court ruling makes the reselling of software, and basically any form of media with a EULA, an enforceable legal action. It’s all based on that legalese agreement that we don’t read.

I recently looked for the Halo: Reach EULA. I found none. I checked a few other console games and all were devoid of anything resembling Autodesk’s restrictive language. However, what’s to prevent any software manufacturer from including the “licensed, not sold” mantra, especially with this precedent? It’s concerning that I could purchase a physical product, install it and not have the legal right to sell it. Now might be a good time to start reading just what we have all been blindly agreeing to for all these years.